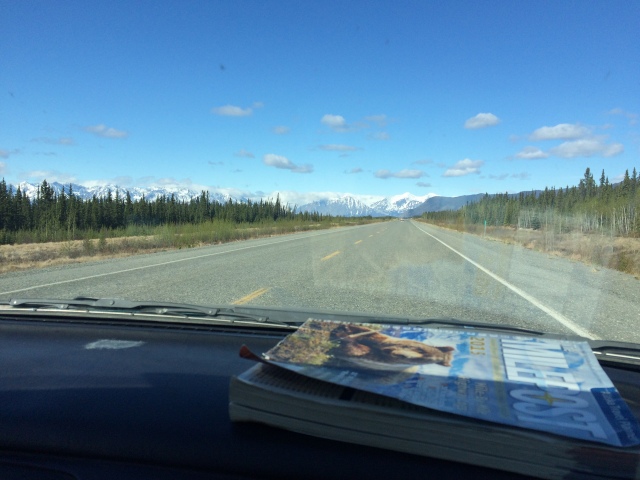 “Oh my god! Look at those mountains!”

Cady continued to flip through The Milepost. It was the fifth time I’d made this remark in the past half hour; by now it roughly translated to: “I am paying attention as I drive.”

We’d been without cell service since that morning in Smithers, BC. Sick of the music we had downloaded on our phones, we drove in silence, punctuated only by comments on the beauty of the passing landscape (mountains, lakes, and trees); laments about our lack of caribou sightings; and readings from The Milepost, a thick, annually published magazine detailing every point of interest along major highways in BC, the Yukon, and Alaska. The latter made for the bulk of our most interesting communications.

“There will be litter bins to the left in two kilometers,” Cady announced.

As promised, roughly a minute later a paved pullout and a pair of brown, bear-proof bins appeared on the horizon. I could feel my puny, underdeveloped imagination straining to stay engaged when the world around was not mediated through a smart phone.

“Jade City, population 50, is not a city but a highway community made up of one jade business,” Cady read. “…highway travelers have come to know this spot as the place to stop and buy jade. The miners in the Cassiar Mountain Range produce 1 million pounds of jade each year, and half of that is exported… ooh! They have FREE coffee!”

Cady went on to read the ad for Jade City on the opposite page, which boasted that the Cassiar Mountain Range supplies 92% of the world’s jade, a figure that resulted in much debate as, when coupled with the figure in The Milepost, it suggested that Canada consumes 46% of the world’s jade. I pictured jade villages nestled in the foothills of the Cassiar–good-natured Canadians opening heavy, all-jade front doors and stepping onto gleaming, green patios to greet neighborhood moose with a handful of maple candies. Regardless of the veracity of their jade figure, they had me at FREE coffee.

We pulled into Jade City at 5pm on the dot and jogged to the door, reasoning that if we got a foot over the threshold before 5:01, they’d be forced to hand over the coffee. Two women resembling indoor house cats greeted us as we entered. Neither seemed to be closing up the store.

“Help yourself to some coffee in the back,” the one in the Harvard Med School sweatshirt said. My vision of utopia is a society where all business establishments, no matter their purpose, offer free, expertly brewed coffee (and perhaps a baked good or two) to passing strangers regardless of their race, religion, gender, or sexual orientation. I gave Harvard Med School sweatshirt the smile of someone whose wildest caffeine-laden fantasies are coming true.

The coffee was hot and not too acidic. Paper cups in hand, Cady and I wandered the store, peering at jade objects ranging from the arguably useful to the undeniably useless–jade coasters, jade pendants, jade dice, jade bears, jade earrings, things I guessed were jade paperweights but wasn’t entirely sure. Bags of slate-colored rocks which Harvard Med School sweatshirt promised were jade, and could be made to resemble jade if heated in the oven and rubbed with beeswax. The shop was not limited to selling jade, of course. They had an extensive collection of postcards advertising their store; DVDs about the trials and tribulations of jade mining; hats with what were either maple or marijuana leaves, depending on your inclination; and a tapestry detailing the lessons we all can learn from cats (the latter may not have been for sale). They had baubles and trinkets made from a dusty pink stone called rhodonite, a black stone the woman couldn’t remember the name of, and amethyst, which the woman informed us came from Uruguay.

As we continued to circle, I felt a growing compulsion to buy everything in the store. Not because I wanted it or needed it or thought anyone in my immediate family or friend circle might want or need it, but because it was there and I could. Any trinkets or baubles I bought would serve as irrefutable evidence that I had been here, stood in this exact spot, FREE cup of coffee in hand, surrounded by trees, lakes, and the snow-dusted peaks of the Cassiar. That was a feeling I very much wanted to own.

Like a star in a close binary system, I orbited the merchandise, circling ever nearer. Perhaps sensing that the end was near, the woman in the Harvard Med School sweatshirt engaged us in conversation. She asked the questions we’d come to expect from those we encountered on our journey.

“Where are you from?” the script began.

“LA and Virginia.” This was always followed by a comment on how far away those places were and the question of what had brought us to the region. In turn, we would inform the asker that we were headed to Anchorage.

“I don’t know where that is, but it sounds far away.” She was off book now. Cady and I exchanged a glance.

“It’s a city in Alaska,” I offered. “I’m headed up there to start a job.” Back on book, she asked what the job was. I replied that I’d be working as a campaign manager for a state politician.

“Sounds pretty boring. But I don’t really follow politics.” Resigned, I set my script aside and asked how long she’d been working at Jade City.

“Three days.” She planned to work in this tiny, isolated jade store for the next three months as part of her and her husband’s big, two-year adventure. They’d be back in Victoria (I kept silent about the fact that I couldn’t place this city/town/village on a map to save my life) for the winter. They’d move to Alberta next summer where her husband would work as some kind of mechanic in the oil fields (when asked where and what her husband’s current job was, she didn’t seem entirely sure). In two years time, they would buy a house in Ontario, settle down, and have kids. I marveled at the smooth, well-reasoned nature of this adventure and wondered if she’d gone to Harvard Medical School.

As I watched the woman ring up our totals, each amounting to over thirty dollars worth of jade-related merchandise, I realized that we had unwittingly purchased the world’s most expensive cups of coffee.

On the way out the door, I stopped and got a free refill, bringing the total cost of each of my cups down to roughly $15.