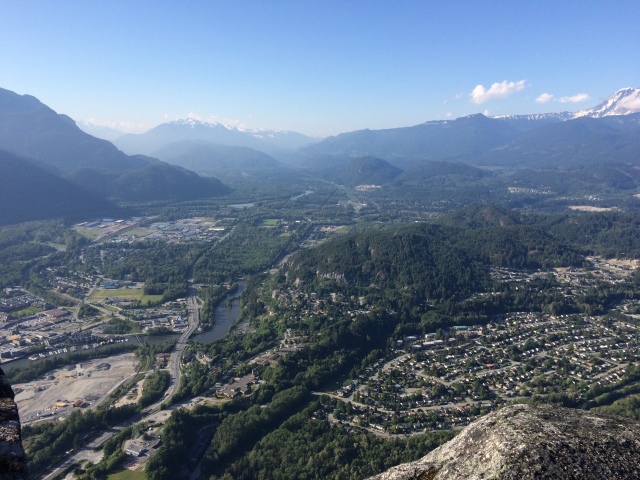 Ceri: Saturday mornings are a quiet time in the Squamish ER.

A Canadian home makeover TV show was playing on mute on the flatscreen above the waiting area. A solitary old man sat in one of the identical blue chairs positioned in two rows facing the TV. It was unclear if he had a medical emergency or what his agenda might be. Perhaps he was waiting for someone, or perhaps he was one of those people who revel in the misfortunes of others. For him, this was something akin to catching the matinee at the local theater.

As Cady and I approached the check-in desk, we stepped around a woman who was using the early morning quiet as an opportunity to mop the floor. Behind the desk, a woman in scrubs was leaning over, explaining how to locate a file on the computer to a woman whose pedestrian clothes identified her as the one manning the desk.

Neither woman looked up as we approached, and we had not approached silently. They persisted in their file-locating conversation as Cady shifted from foot to foot, clutching her hand to her chest. The woman mopping was forced to leave a little island of unwashed floor around our feet. I gave these women the benefit of the doubt, choosing to believe that had Cady been bleeding profusely from a place visible above the counter and/or screaming in pain, they would have sprung into action with something resembling alacrity. But I wasn’t entirely confident.

Just as I was about to launch into a fit of clichéd throat clearing, the woman manning the desk looked up and asked how she could help. Cady very politely explained our trouble.

“ID card,” the woman extended her hand. We then explained that we hailed from the US of A.

“I should tell you you’ll be charged a $765 entrance fee,” she replied. This fee did not include doctor’s fees or procedure costs. We would later learn that the average emergency room visit in Canada costs $1,500.

“You could try the walk-in clinic,” she offered.

“I can call them,” said the woman in scrubs, still standing behind her.

At that moment, a person so covered in medical wires and tubes it was impossible to identify them as anything more than a mound was wheeled in on a gurney.

“I should go,” the woman in scrubs said, somewhat unnecessarily.

In the end, the woman manning the desk gave the clinic a call. We learned they would not open for another two hours. Cady stepped outside to discuss the matter with her parents. I remained in the waiting room and took a seat a few chairs to the left of the old man. A large poster read “Please clean your hands so we won’t need all these posters.”

I looked at my hands. They were covered with bruises, half-formed scabs, and a layer of dirt the same shade as JFK’s skin. The crease between thumb and index finger was zombie gray from where our very dirty rope would pass over my hands when I belayed. It felt like this poster was speaking directly to me, so I got up and washed my hands in the bathroom located to the poster’s immediate left.

Cady returned, and we made plans to head north to a walk-in clinic in Whistler, a ski town on route to Anchorage. Feeling a mixture of annoyance and regret, we returned to our campsite in Chekamus Canyon and packed up, leaving the granite walls of Squamish to continue our journey northward.

Cady: As Ceri collapsed the tent at Chekamus, I puttered around the campsite looking for items I could toss one-armed into the car. In the campground, only a few other sites showed signs of life as sport climbers crept out of their tents to greet the morning.

On the road northward, the morning’s events played on repeat in my mind.

“Hey…Ceri? I uhh….” I had gestured to my clenched hand.

“Do you want tape or superglue?” she’d asked, the way one might ask if you wanted the radio on or off.

The fastest way I could think of to explain the severity of the situation was to just show her. I’d opened my left hand while looking away and trying not to think about the deep, fleshy gash at the base of my index finger.

“I think I might need stitches.” She seemed to get it then and started throwing things in either the car or the tent in an effort to make a speedy exit. Under the rain fly, she’d placed the cast iron skillet, still warm and coated in oil, ready to receive the eggs we’d intended to cook. As she was putting away the food, she paused and asked if I wanted anything to eat.

I’d shaken my head. Something about seeing my finger cut open like a chicken fillet had left me without appetite. Ceri grabbed an apple and held it with her teeth as she’d finished shutting the trunk.

On the way to Whistler, I tried to find some consolation in excuses like “well, this was going to be our last day in Squamish anyways” and “it’s still supposed to rain this afternoon…probably?” but these were far overtaken by imagining a number of what-ifs that would have diverted us from our current predicament.

What if I had been more careful? What if we had opted for oatmeal instead of eggs and leftover burrito filling for breakfast?

I thought about the halved avocado, pit intact, now sealed in a Tupperware somewhere in the trunk, and hoped it didn’t have blood on it. I shifted my hand a bit to try and get it to stop throbbing.

Ceri: The woman behind the desk at the walk-in clinic had neon blue hair and was very attentive. When the doctor passed through, she pointed to us saying, “these are the girls from the phone call this morning.” The doctor peeled back the paper towel Cady had clamped to her wound and gave us confirmation that this was an injury they could deal with on site.

We then began the interminable wait I associate with medical emergencies as the doctor saw to patients who were on a first name basis with the blue haired woman behind the desk, the ones, I assumed, with scheduled appointments. Cady and I passed the time scrolling through social media on our respective devices. 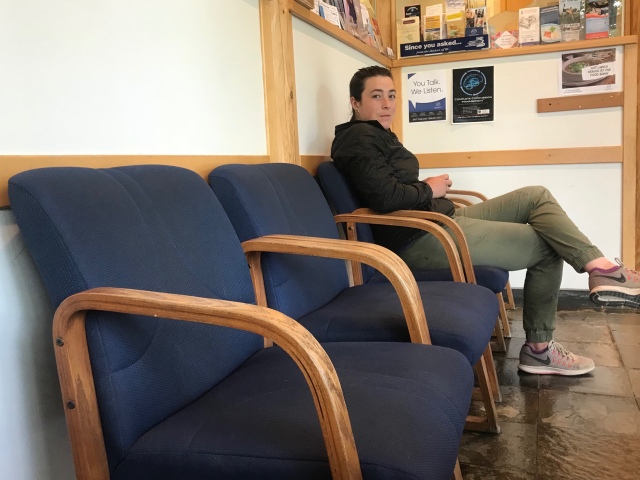 When Cady was finally called in to a room, I asked if she wanted me to come with the way my mom does when she accompanies me to a medical appointment. I always say “yes,” afraid that if left to my own devices, I’ll forget to ask the important questions. Cady does not suffer from this same complex and declined my maternally-inspired offer.

Alone in the waiting room with thoroughly scrubbed hands, the only productive thing I could think to do was walk to the nearest coffee shop, buy myself an Americano and muffin, and call my mom.

Cady: I was led to a small room just off the waiting area, where I plopped onto the examination table and waited for the young, polo shirt wearing doctor to reappear.

He soon did, and followed his apology for the wait with a “so you had a bit of a run in with the kitchen, yeah?”

“Well, err, campground actually.” My response prompted some questions about what I was doing in BC as he checked my finger mobility and the integrity of my tendons. Having learned I was a climber, he instructed me to crimp down as he assessed the tendons at each joint and compared them to my right index finger. I squeezed my eyes shut to avoid staring at the crevasse on my finger, a habit I would continue through most of my time in that room.

The doctor apologized again for the wait as he cleaned and froze my finger. “Scheduling is hard in a walk-in clinic, you never know how long appointments will take. I always like to keep people in the loop as they wait.” Earlier, when Ceri and I were hanging out in the waiting room, he had darted in to tell the blue haired front desk woman that he’d need ten extra minutes or so to finish up with a previous patient. “This morning, we had some complex cases come in. I like complicated issues because they’re interesting, but you never know what to expect.”

I didn’t ask for an elaboration, in part from some idea of patient privacy, but mostly because I was concentrated on not feeling slightly queasy as he started stitching. But he went on to describe how between regular scheduled appointments and emergency visits, the psychiatric cases were the hardest, as patients would sometimes just say they needed someone to talk to and would refuse to divulge why.

The doctor kept up a steady stream of chatter. By the end of my visit, I had heard about everything from his cousin’s PhD in astrophysics to the wonders of the hands-free exam table lamp that meant he never got blood on the light switch.

I wondered if the doctor had these sorts of conversations with many of his patients, or whether my out-of-town-ness gave me special access to his stories of walk-in clinic life.

Five stitches later, I finally opened my eyes to assess the handiwork and snap a picture to send to my parents. 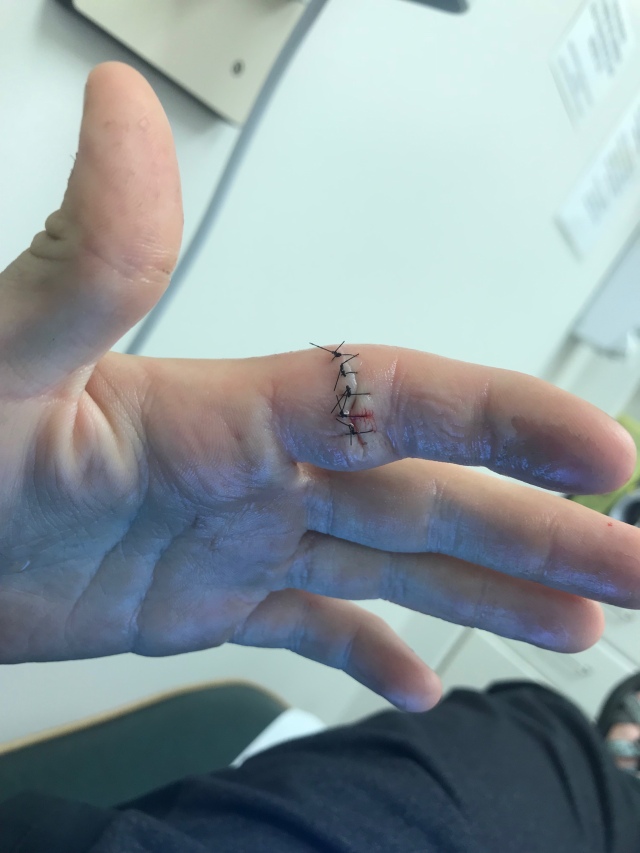 I was ushered back into the waiting room to get my receipt and a cup of water from the washroom (I had been told the tap water was high quality, as it came from an alpine lake) before wandering back outside to find Ceri, who looked pleased for having saved a dollar on parking.

Ceri: It looked like Cady’s gash was being held together by five large mosquitoes. I asked if it hurt, but she said it was just tingly as the local anesthetic wore off. Some time later as we drove between steep, snow-capped peaks, she asked if we had any ibuprofen, so I figured it had worn off.

Like Cady, I mentally retraced my steps that morning, searching for desision points that might have led to a different outcome. There’s a sense of power that comes from being able to look back and say “this is where I went wrong; if I’d done things differently, everything would be fine.” It preserves the fragile feeling that we are in control of our lives.

Periodically, we bump up against events that make this comforting illusion a bit more difficult to maintain, events where the culprit is ambiguous and possibly non-existent. Like avocado de-pitting, trad climbing is an inherently dangerous activity; even when you do everything right, you are still putting your life (or hand) at risk. And that’s really scary.

The last time I’d worried about the dangers inherent to climbing, I’d talked about the issue with a coworker who’d pointed out that I could just as easily die driving a car; I might as well die doing what I loved. That didn’t really make me feel better, but I guess there’s some truth to it. Our trip to Squamish had ended with a knife glancing off an avocado pit, but it could just as easily have ended on a gurney, under a pile of medical wires and tubes. Today we’d been unlucky, but also very lucky. 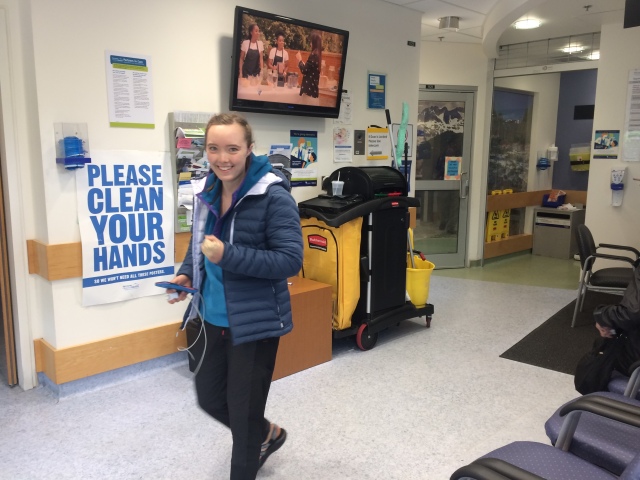